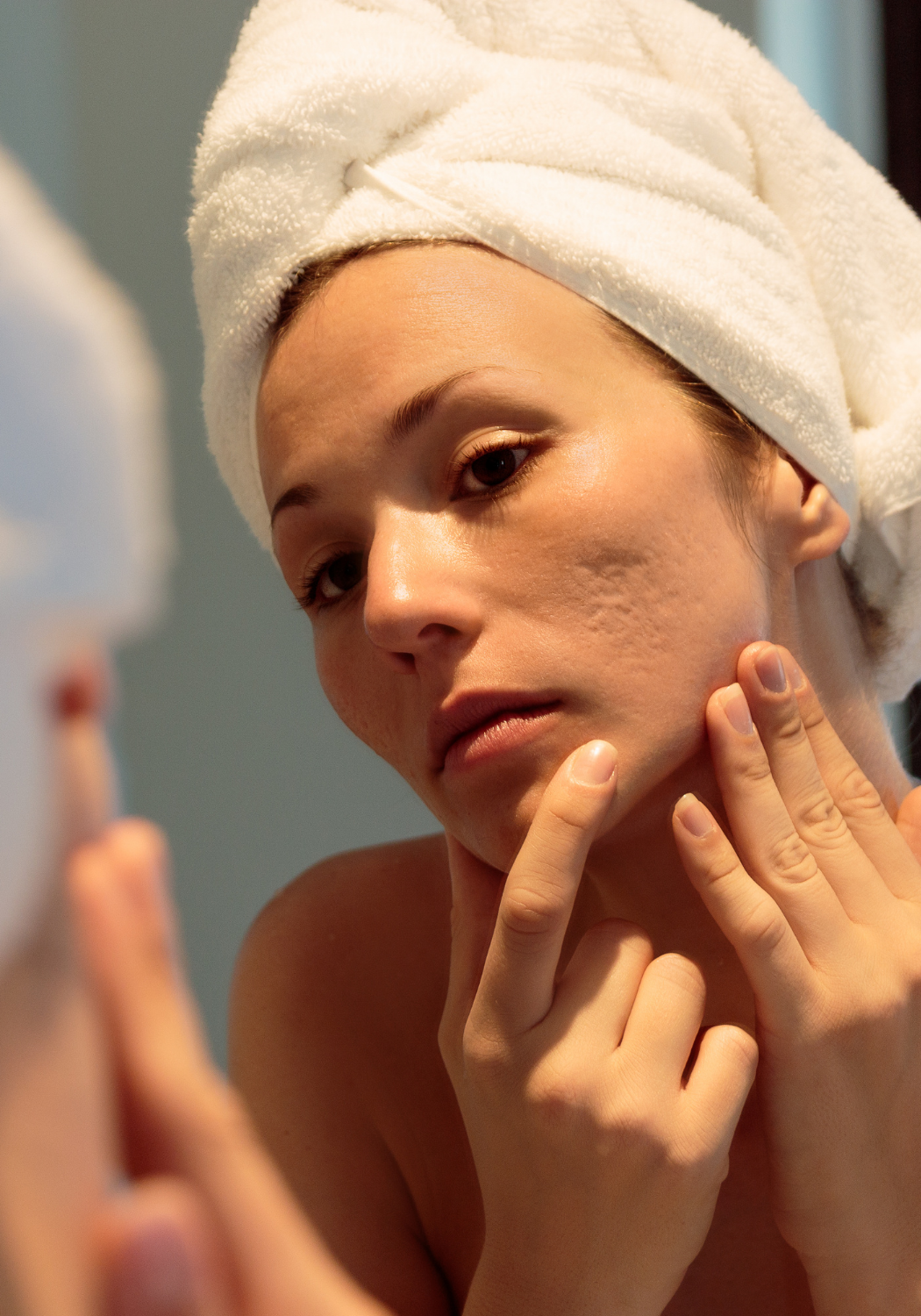 Acne scarring occurs in the dermis and refers to a process where collagen within the skin is damaged from inflammation, leading to permanent skin textural changes. When people suffer from acne the dermis becomes inflamed and the body attempts to repair the wound created when pimples or blackheads are burst or otherwise removed. However, some people can refer to scarring when they see colour changes that remain for months after an acne lesion has healed. Acne scarring can range from red blemishes to indented scarring.

At our award winning skin clinics in Dublin, Athlone and Mullingar we have an entire team of dedicated professionals who have been trained to perform a wide range of Acne Scar Treatments.

Scars are areas of fibrous tissue (fibrosis) that replace normal skin after injury. A scar results from the biological process of wound repair in the skin and other tissues of the body. With the exception of very minor lesions, every wound (e.g. after accident, disease, surgery) results in some degree of scarring.

Acne scars can form from a reaction to the inflammation and infection in the skin caused by acne. During the inflammatory process, tissue is destroyed and in an attempt to heal the skin, a reaction called fibrosis occurs. Fibrosis leads to changes in the texture of the skin that can be thinner (called atrophic) or thicker (called hypertrophic) than normal skin.

Are there different types of acne scarring?

Ice Pick Scarring – This common type of scarring is usually deep, very narrow and extends into the dermis. The skin surface looks as though it has been pierced by an ice pick hence the name ‘Ice pick’ scar. Some ice pick scars are large in size and others look similar to an open pore.

Boxcar Scarring – Boxcar scars are usually rounded or oval shaped depressions in the skin with steep vertical sides. Much wider than an Ice pick scar, they resemble the scars left by chicken pox and usually found on the cheek area.

Rolling Scarring – Scars that give the skin a wave-like appearance across otherwise normal appearing skin is caused by damage under the skins surface. These scars tend to be wide and shallow in appearance.

Hypertrophic Scarring (Keloid Scarring) – A Hypertrophic scar is raised from the skins surface and is firm in texture. These types of scars are commonly found on the back or chest area of the body but can also appear and on the face and neck and usually reduce in size over time. Keloid scarring is a form of Hypertrophic scarring.

What causes the dark spots around my acne lesions?

At The Laser and Skin Clinic we offer the latest technology for the treatment of acne scarring. Our team of nurses and therapists are highly experienced in treating acne scarring with a wide range of clinically proven acne revision treatments to choose from including:

Ablative and non-ablative fractional lasers such as ActiveFX Laser Resurfacing and Affirm Laser Rejuvenation are an extremely effective acne scar treatment. Fractional laser works by treating a “fraction” of the skin, creating thousands of tiny perforations, whilst leaving undamaged skin intact. These undamaged cells move into the “damaged area”, and heal the wounded area. The injury to the damaged skin causes collagen stimulation.

Both treatments are extremely effective when improving the appearance of acne scars. Active Deep FX penetrates the skin deeper and requires more recovery time while the Affirm laser requires very little down time and more treatments are recommended to achieve optimal results.

I would like to reduce the appearance of my acne scars but I cannot take time off work to recover. What other treatment options are available?

For anyone who wants little to no downtime the Dermapen micro needling treatment or Affirm Laser Rejuvenation may be the best option. Dermapen Micro needling treatment can provide dramatic results improving the appearance of all types of scars including acne scars. The micro needles of the Dermapen create new collagen and elastin to be generated and deposited called collagenesis. The physical nature of skin-needling breaks up this fibrous and uneven scar tissue and stimulates the growth of new tissue thus improving the appearance and texture of the skin surface. A combination of both treatments may be recommended as both have minimal recovery time.

How many Dermapen treatments will I need to notice an improvement?

While each client is different and conditions will vary, the typical recommended treatment course will consist of 6 treatments to achieve the best result.

Can Chemical Peels improve the appearance of acne scars?

A chemical peel is a great all around treatment that not only improves superficial scarring, but treats a multitude of skin conditions in one treatment. Active DeepFX and Dermapen Micro needling are preferred for more indented type scarring but chemical peels are excellent for shallow scars and discoloration associated with acne scarring.

MyCells Platelet Rich Plasma treatment also known as the ‘Vampire Facial’ uses a purified and concentrated portion of your own blood to rejuvenate your facial skin and the tissue underneath. PRP injections are capable of naturally accelerating normal healing and tissue repair and therefore treatment of scars and skin tone.

Platelet Rich Plasma involves is a total of 3 treatments performed 6-12 weeks apart. The results have shown rejuvenated skin with effects lasting over 18 months and when combined with Affirm Laser Rejuvenation can further boost collagen production.

Can topical Vitamin A reduce the appearance of acne scars?

The effect of Vitamin A is superficial, and the changes that are seen are primarily epidermal. Therefore, the only scars that can be improved would be those that are extremely shallow. Pure Vitamin A works by stimulating cell turnover and collagen production in the skin. It increases the skin’s own exfoliation process to remove dead cells while stimulating new skin cells faster, resulting in better skin texture and appearance.

Pure Vitamin A can therefore help remove the pigment associated with acne scars by causing these coloured cells to flake off more quickly than without it. It can work as a treatment for acne and can help minimise the appearance of mild acne scars however the scar revision benefits of topical retinoid for significant acne scarring is quite modest.

When treating acne scars, a topical retinoid is best used in combination with other treatments.

The Laser and Skin Clinic

*Results and benefits can vary and are different for each individual. Therefore The Laser and Skin Clinic cannot guarantee specific results.

© The Laser and Skin Clinic 2023. All rights reserved.