Rosacea is a facial rash that occurs mostly in middle-aged men and women. The cause of Rosacea is unknown. It affects people mainly in the 30’s and 40’s, especially those with fair skin. 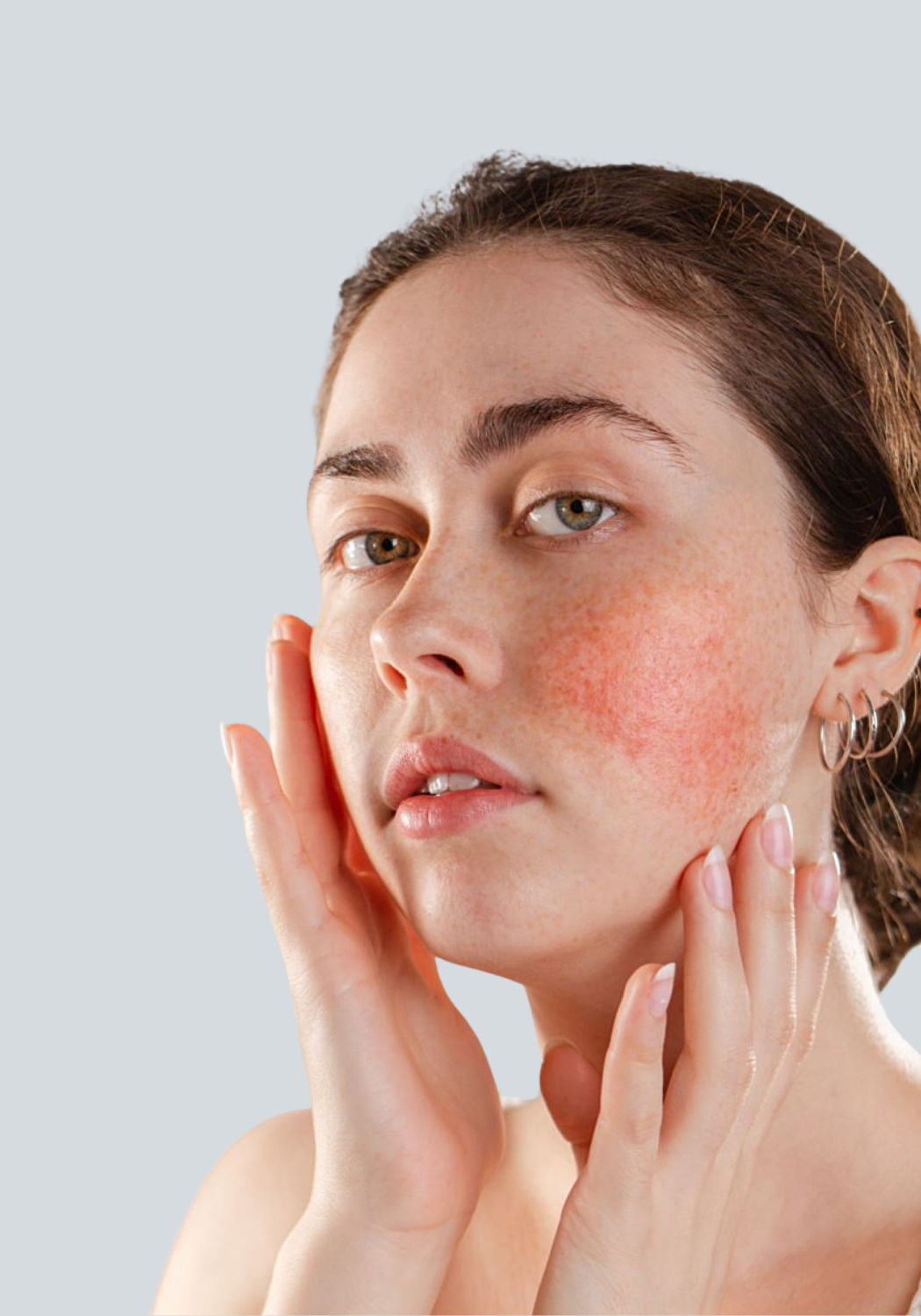 With Rosacea, the skin of the face and in particular the cheeks and nose tends to flush easily and over time becomes permanently red. Thread veins appear in the same sites and in pustular Rosacea (formerly known as Acne Rosacea) spots and pimples appear too. The condition is aggravated by over production of oil from sebaceous glands, hormonal changes, sun exposure, UVA/UVB, stress, climatic changes and some foods such as coffee, spicy foods and alcohol. Most sufferers are keen to improve the appearance by treating any pimple spots and reducing the redness and thread veins. Rosacea can be treated and controlled, and the sooner, the better. This condition generally gets worse if it goes untreated, causing more redness, more pimples and more visible veins. Rosacea can be treated but at this stage cannot be cured. Some severe cases will require oral or topical antibiotics prescribed by your doctor.

Rosacea treatment includes laser treatment on visible veins to reduce redness in combination with products to protect the skin i.e. broad spectrum sunscreen and antioxidants. Recurrent flushing and blushing is present and late in the disease, the nose may be enlarged with thick red skin, a condition known as “rhinophyma”. Enlargement of the nose is more common in males. Also, along with thicker skin, the oil glands of the face enlarge and are more active giving an oily appearance. Rosacea is often accompanied by other features and symptoms such as rashes, erythema, red bulbous nose, acne like eruption and burning sensation.

Stages of Rosacea
Stage One – Redness The cheeks or forehead appear to have a flush or sunburn. The redness is caused by dilation of the blood vessels in the skin, which allow more blood to flow and pool under the surface of the skin.

Stage Two – Pimples The next stage pimples may appear on the face. The types of pimples seen in people with Rosacea differ from acne, which are characterised by blackheads or whiteheads. In Rosacea the pimples appear as small red and solid or pus filled. A characteristic symptom of Rosacea is dilated blood vessels that become distended under the surface of the skin.

Rosacea is a common disease that encompasses a broad range of symptoms. Rosacea usually begins in middle aged men and women and is characterised most commonly by flushing, facial redness, and visible blood vessels. Some forms of Rosacea also cause red bumps, pimples, thickening of the skin and eye symptoms.

The cause of Rosacea is now known to be associated with the sebaceous glands but can be exacerbated by sun exposure, hormonal changes, stress, diet and alcohol.

What are the symptoms of Rosacea?

The most common symptoms include facial redness – usually on the nose, cheeks, chin and forehead. Visible vessels (called telangiectasias), facial swelling and burning sensations are also experienced. Red bumps or pimples may be seen as well. Rosacea can develop gradually, as mild episodes of facial blushing. Over time, flushing may lead to a permanently red face.

What rosacea treatment options are available?

There is no cure for Rosacea. Rosacea treatment recommended at The Laser and Skin Clinic is aimed at controlling the redness, inflammation and skin eruptions though treatment of topical products and laser treatment. Once Rosacea had progressed to the stage where redness and veins are evident the only choice is laser treatment.

The laser uses thermal energy to effectively diminish the dilated blood vessels to reduce redness and visible veins. A number of treatments typically 4-6 treatments at 4-6 week intervals may be required. Combination treatment and products work best to treat and control Rosacea.

The Laser and Skin Clinic

*Results and benefits can vary and are different for each individual. Therefore The Laser and Skin Clinic cannot guarantee specific results.